There are 2 of these German patrol boats that have been sunk between Dieppe and Fe’Camp. AF13 located in just 20mtrs of water, One is upside downand very broken, the other is on its side, her armaments buried in the sand and depth charges scattered around.They make interesting second dives. 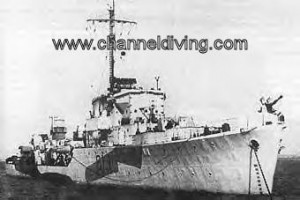 HMS Berkeley – The Royal Navy escort destroyer HMS Berkeley formed part of the attack force for the raid on Dieppe on the 19th August 1942 she was 272x28x8m and had 4×4”guns and 8 smaller guns. At approx 12.50pm HMS Berkeley received a direct hit from German aircraft bombs which broke he back and she sank with the loss of 15 lives. Today she rests in 20mtrs of water and she is broken into 2 main sections which stand 4mtrs high in places.

In 1941 HMS Princess Iris and HMS Daffodil were converted into Landing Ship Sternchute (LSS) and used as locomotive transports. HMS Daffodil (ex-TF3) was lost off Dieppe on March 17th 1945 after striking a mine. HMS Princess Iris survived the war only to be broken up for scrap. The fait of TF2 was not so lucky, she was also sunk near Dieppe after coming under fire from German shore batteries and sank close to shore in only 15mtrs of water, today the wreck off TF2 is quite broken up. HMS Daffodil is a big old wreck she was 107m long with a beam of 18m, she was powered by 2 6 cylinder triple expansion engines giving her a speed of 13knots. Today the wreck of HMS Daffodil wrests in only 24mtrs of water, she sits upright and is pretty intact giving good swim throughs wreck penetration. The marine life on her is superb with large shoals of Bass and Black Bream in the wreckage. 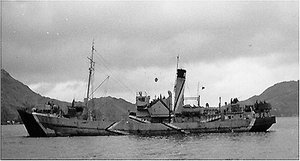 The German Submarine Chaser UJ1404 was sunk during the disastrous Dieppe Raid of August 1942. Seen as a trial run to test the defences for the Normandie Landings in 1944 this raid ended with the massacre & capture of troops from the Canadian Regiments & British Commando Units.

The wreck of UJ1404 rests in 20mtrs water and is over to port by maybe 45degrees. She is quite broken with a gap between the main body of the ship and the bows. A large 88mm gun lays in the wreckage of the bow with ammunition scattered. As you move back towards the stern the bridge and superstructure is collapsed down and open in places. The boiler, engine, stearing gear & irn propare all visable. There are depth charges in and around the stern. 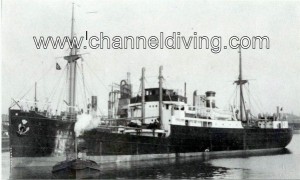 This large merchantman some 232x36x14m was taken over by the German navy and used for escort duties.On the 11th of December 1942 she was attacked and sunk by British warships 8 miles to the north of Dieppe, there were only three survivors from the sinking. Today this wreck sits on an even keel with the bows being the highest point, she rests in only 25mtrs of water and is very intact, a large gun sits on the bow as if ready for action, with the magazine store below full of ammunition. As you work your way back along the wreck you can explore the large hold area which gives good access for penetration, before you get to the engine room and then on to the rear and the stern accommodation. Debris litters the seabed and on one of our visits, all around the stern were dozens of cuttle fish, a fabulous sight 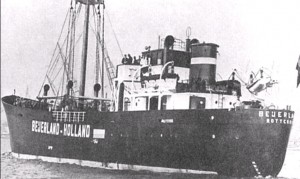 The Beijerland was a Dutch cargo ship launched in 1939 near Rotterdam. She was nearly 200ft in length and had a beam of almost 30ft and she weighed in at 387tons. She was powered by a large 12 cylinder engine producing 640 horse power. The Beijerland was seized by the germans during the invasion of the Netherlands and converted into a armed merchantman and re-named Sperrbrecher 144. The Sperrbrecher 144 now rests in less than 20mtrs of water and is quite broken open, her large diesel engine sits upright in the middle of the wreckage, as you move to the stern you come across one of her large deck guns with munitions scattered around. Her large rear stearing gear is openly visable and as you make your way back towards the bows you see masses of fish and sand eels all around. The seabed is a mixture of shell, shingle and white sand offering great visability. 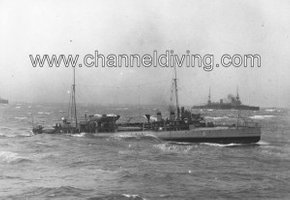 Yatagan – This is the wreck of a small French Destroyer, 185x21x9m, She had a top speed of 26 knots and her armaments consisted of 1×9 pdr gun, 6x3 pdr guns & 2 Torpedo tubes. She was lost due to a collision with the British steamship Teviot, north of Dieppe on December 3rd 1916, she carried a complement of 62 crew. Today the wreck rests in 33mtrs of water on her Port side, most of her plating has eroded exposing for all to see. Large piles of munitions lay scattered in the wreckage alongside her guns, 2 large prop shafts bend their way along the length of the wreckage and the marine life is amazing. 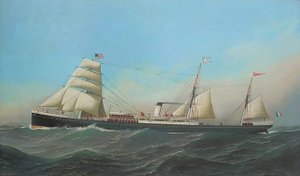 4,035 gross tons, length 386.5ft x beam 41ft, one funnel, three masts, iron hull, single screw, speed 12 knots. Accommodation for 50-1st and 1,200-3rd class passengers. Built 1884 by Chantiers and Ateliers de la Gironde, Bordeaux for the Bordeaux Line, she started her maiden voyage from Bordeaux on 26th Feb.1884 but her rudder was disabled and she arrived at Halifax under tow by the Anchor Line ship CALEDONIA and eventually reached New York on 27th May. Her last Bordeaux – New York voyage was made in July 1888 and she was then chartered to the French Line for their Bordeaux – Havana – Vera Cruz service.On 28th Apr.1889 she was sunk in the English Channel in collision with British ship MANORA. The Chateau Margaux lies 24miles north from Dieppe in 41mtrs at high water & rests on her starboard side, the bow and stern are the highest points with the middle of the ship collapsed down to the seabed but still quite open and exposing her 4 large boilers. The fish life on this wreck is incredible but strangely no congers. The seabed is a fine white shingle shell giving good visability. 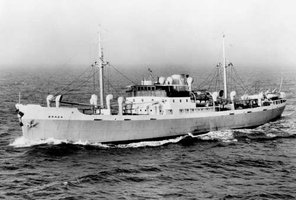 M/S Braga 1938 – The Norwegian ship Braga built in 1938, she was 87mtrs long 13mtrs wide and had a draft of 6mtrs, departed Dieppe harbour on 7th Febuary 1961 and headed out to sea, but whilst she was leaving she struck the harbour wall and unbeknown to her, she had made a hole in her hull. The ingress of water must have been quite slow as she managed to get some 20 miles off shore before she sank. This wreck today lies in 34mtrs of water at an angle of 45 degrees to her port side, still pretty together and ship shape you can access the accommodation areas and swim throughs.

SS Oijfeld - This Norwegian steamship was built in 1912. She is 250 ft Long x 38 ft Beam. A 3 cylinder triple expansion engine sits exposed in the middle of the wreck with her 2 boilers side by side. This big wreck sits upright on an even keel, rudder and big iron props still in place. Lots of fish and marine life on the wreck with Pollack, Bass, Congers and a mass of Bib getting right in the way as usual plus lobsters and crabs wondering around. 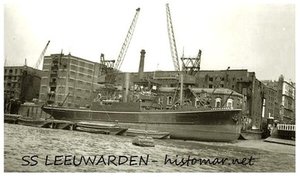 SS Leeuwarden - was sunk on 24th Febuary 1942 when the coaster was sunk by enemy gunfire, she was enroute from London to Dieppe with a cargo 560 tonnes of potatoes.

SS Normandie - This French Transport Steamship rests in 32mtrs on an even keel, she is only 50mtrs in length with a narrow beam 8.3mtrs. The wreck is very collapsed downstanding only afew mtrs high, The tallest part and standing high in the middle of the wreckageis a single engine and boiler exposed where all the ships plating has eroded and collapsed down around it. Bow and Stern is collapsed down with Prop and Anchor at the appropriate ends. An abundance of life cover this rarely dived wreck with most of the wreck under the shingle. 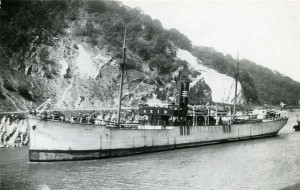 SS Heim -  Was originally built as the SS Romanby by W Gray & Co, West Hartlepool in 1882. She was 260ft x 32ft x20ft, fitted with a 2-cylinder compound engine. She was sold to T.H. Skogland of Norway in 1899 and renamed SS Heim. On 18th April 1917 this ex British Cargo Steamer of 1700tons was on a voyage from Hull to Rouen with a cargoof coal when she struck a mine laid by UC-71, She sank North East of Dieppe in 25mtrs of water with the loss of 2 lives.

SS Netta - This steamship built by Montrose Shipbuilding Co, Montrose in 1909 and owned at the time of her loss by Cheviot Coaster Ltd, Newcastle, was a British steamer of 370 tons.On September 3rd, 1916, SS Netta wason a voyage from Rouen to Newcastle in ballast, shewas sunk by the German submarine UB18. There were no casualties. 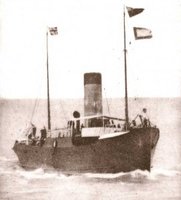